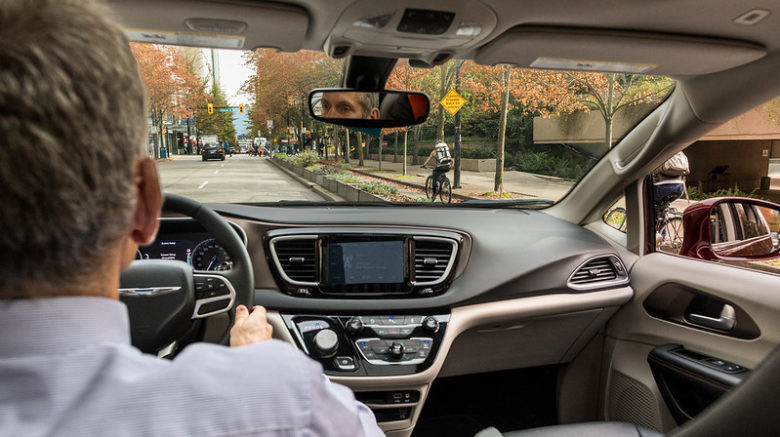 As we struggle with traffic on our main roads and speeding in our neighborhoods, the people of Providence are ready for reliable, affordable, and safe transportation options.

Click the plus signs to the left of each question below for the answer to frequently asked questions. And sign up for updates from the Providence Streets Coalition to continually be informed about what, where, and why changes are happening to the streets of Providence!

Why does this matter – why should we improve streets for walking, rolling, biking, and transit?

SAFETY: According to the Great Streets Plan, every year, on average, from 2009 to 2015, over 150 people walking and over 60 people riding bicycles were hit by cars in Providence. We must protect the people who are riding, walking, and rolling now, as well as make it safer for others to do so. When considering street safety for people traveling outside of motor vehicles, speed is the most important factor.

Speeding is not an antisocial choice made by bad people –– it is a natural reaction to the design of the road. If there are wide driving lanes and open sight lines, people will speed. Police enforcement of speeding is expensive and piecemeal. Speeding cameras are typically effective, but generally unpopular and expensive to operate. The proven way to protect all people on city streets is by narrowing them, making it uncomfortable to speed. Roads can be narrowed by planting trees, extending curbs and sidewalks, installing on-street bike lanes, and painting narrower travel lanes. This is sometimes referred to as “traffic calming” or a “road diet”.

CLIMATE: According to a recent report by Brown University and the Stockholm Environment Institute, Rhode Island’s transportation sector contributed 40% of the state’s greenhouse gas emissions in 2016. The report revealed that we have a 20-year window to make dramatic changes to our GHG emissions in order to avoid catastrophic climate consequences. They recommend major investments in transportation modes other than personal vehicles.

RACIAL EQUITY AND ENVIRONMENTAL JUSTICE: The Federal Aid Highway Act of 1956 financially incentivized states to demolish urban communities of color in order to build fast roads for white suburban commuters – Routes 6 and 10 through Olneyville in Providence being a perfect example.

“What decision-makers thought of low-income communities is reflected in where and how they built our transportation infrastructure-certain values of that time are embedded in that infrastructure,” said former U.S. Department of Transportation Secretary Anthony Foxx in 2016. “While we cannot change the past, we can ensure that current and future transportation projects connect and strengthen communities, including areas that have, in the past, been on the wrong side of transportation decisions,” he added.

PUBLIC HEALTH: Sedentary lifestyles contribute to a range of diseases – we all need to move more. Incorporating physical activity into how we get around has highly impactful health and economic benefits – both for individuals and for societies. Living near highways and busy roads also puts people, especially children, at higher risk of asthma and other respiratory diseases due to the air pollution caused by cars and trucks.

Why do people on bikes, scooters, skateboards, and other mobility devices need their own space on the road? 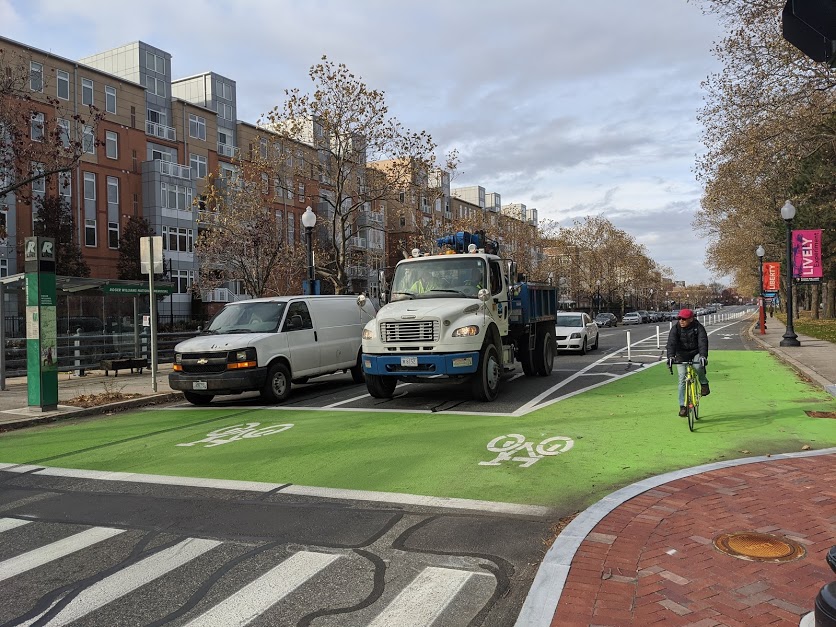 When traveling on busy streets, people outside of cars are vulnerable to being hit. When moving on sidewalks, people traveling faster than walking speed put people walking and using wheelchairs at risk. That’s why we need to create clearly marked, separated space for people traveling at low-to-medium speeds – not ask drivers to “share the road,” unless those roads are designed for low speeds.

While it is legal to ride bicycles and scooters on sidewalks and with the regular flow of traffic on streets in Providence, the safest and most comfortable way for most people to ride bicycles or scooters is within their own dedicated space on the roadway.

Traffic is bad enough. How can we make space for urban trails when there is hardly enough space on our roads as is?

But why two-way “urban trails” and not just regular one-way bike lanes?

86% of people are concerned about their personal safety when riding bicycles in Providence, and 65% are worried about being hit by a motor vehicle. Feeling safe from traffic requires vertical separation from cars on high-speed roads (over 20mph), typically in the form of bollards, planters, curbs, or other types of barriers. Conventional painted bike lanes (sometimes called “door zone bike lanes”) that put people at risk of opening doors and of motorists traveling or parking in them are simply not safe enough for the majority of people.

In Providence, the City is defining urban trails as “on- or off-street paths that are safe, comfortable, and easily accessible for people of all ages and abilities. On busy streets, urban trails are fully separated from vehicle traffic. On smaller neighborhood streets, Urban Trails take the form of “neighborhood greenways” –– where a combination of traffic calming and wayfinding provide a consistent, comfortable experience for people using the trail.

There are pros and cons to one-way vs. two-way urban trails. Bike East Bay in California has the most in-depth analysis of the trade-offs for each. Cities typically choose one style and stick to it as much as possible for consistency and predictability. For instance, Montreal and Indianapolis have all two-ways, where Copenhagen strongly prefers one-ways. Here in Providence, the City is implementing two-way urban trails wherever possible because they:

What will be taken away when urban trails are added?

Adding urban trails, in combination with other transportation improvements, doesn’t always mean that other resources will be taken away. Though there may be some tradeoffs, in many cases there are ways to keep parking spaces and actually use parked cars as part of smart bike lane protection and design. Sometimes we might lose a lane for traffic, but that loss of a lane or parking is mitigated with the more positive effect of reducing traffic congestion, calming unsafe speeding in neighborhoods, making walking safer, and encouraging people to bike for short distances where they would otherwise take a car.

We can’t create progress without change. 58% of Providence residents support building protected bike lanes, even if it means reducing the number of driving lanes or the loss of on-street parking spaces in front of homes and businesses.

Why do buses need dedicated lanes? And what about bus/bike lanes?

Rhode Island is the 2nd densest state in the U.S., and yet only 2.9% of people used public transportation to get to work in 2013. In New Jersey, the densest state, 10.8% of people took transit.

Bus lanes, and bus/bike lanes, are a simple, low-cost way to improve transit for thousands of people by allowing crowded vehicles to speed through traffic. They are currently being implemented throughout Boston, and users are seeing their commute times drastically decrease. If “it takes too long” is a reason why more people don’t take the bus, dedicated lanes are the solution. Higher frequency, better route planning, and bus rapid transit elements like pre-paid boarding will also speed up riding RIPTA.

According to the National Association of City Transportation Officials (NACTO), while it’s not ideal, it is safe for people riding bikes to share bus lanes when there are low enough bus volumes and speeds. Here’s a video for cyclists explaining how to share bus lanes.

Why is this something people who primarily drive should support?

Urban trails improve safety and stress on the street for everyone – no matter how they’re traveling. When protected bike lanes are installed in New York City, injury crashes for all road users (people driving, walking, and biking) typically drop by 40 percent and by more than 50 percent in some locations. Urban trails protect the people using them biking, running, and scooting, decrease crossing distances for pople walking, and make driving less stressful and confusing.

Every person who walks, bikes, rolls, or takes transit is a person not in a car causing traffic, and not competing for parking spaces at destinations. Providing more safe and convenient transportation options reduces traffic congestion and parking woes.

Urban trails reduce the chaos and confusion that exists on the road today. Instead of riding or rolling in the street or on the sidewalk, people biking and scooting have their own space. Bicyclists are more likely to follow the rules of the road when they have their own infrastructure. In cities with many transportation options, people take different options that give them the most control over their schedule. Having these options opens up opportunities for everyone—for job opportunities, commuting, recreation and even health.

Why should the City spend money on this when bicyclists and pedestrians don’t pay for the roads?

Common knowledge holds that drivers pay the full cost of the roads they use through gas taxes and other user fees like the vehicle excise tax and car registration. That has never been true, and it is less true now than at any other point in history. Roads cost a lot, and we all pay for them through our income, property, and sales taxes.

Walking and bicycling inflict virtually no damage on roads and streets, and take up only a tiny fraction of the road space occupied by vehicles. Bicyclists and pedestrians pay far more in general taxes to facilitate the use of local streets by drivers than they receive in benefits from state and federal infrastructure investment paid for through the gas tax.

In Rhode Island, RIPTA’s fiscal year 2020 operating budget is ~$129 million. RIDOT is planning to spend $200 million on bicycle and pedestrian projects over the next 10 years, only 4% of their $4.9 billion RhodeWorks program for roads and bridges.

Got another “why” question? Send it to info@ourstreetspvd.org

Partners and supporters of Providence Streets Coalition and others have compiled detailed information about the health, economic, environmental, and quality-of-life benefits of streets built to share.