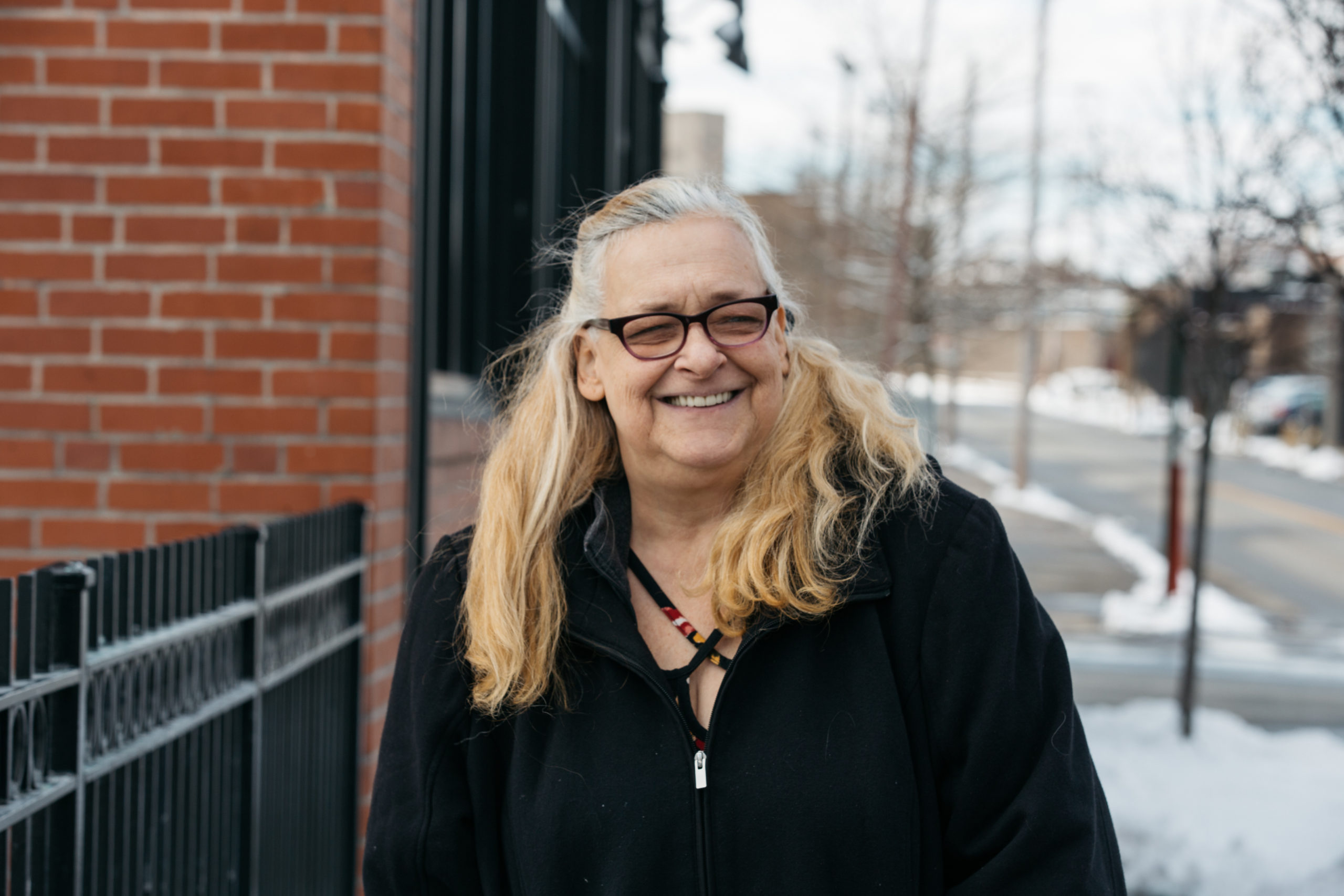 I am Wendy Thomas. I am 61, and I’ll be 62 in October. I live at Dean Street Studios, which is right across from the main police station in Providence. I have many health issues. I’ve had three heart attacks, a hip replacement, high blood pressure, high cholesterol, the whole nine yards. I was homeless at one point. I’m housed now, and I have been for three and a half years.

I usually take the bus. And it’s tough. And it will be tougher if they make the changes. It takes longer to get anywhere by bus than it does by car. So you have to do a lot of planning ahead of time. You have to know your routes. Plan how long you’re going to have to wait for the next bus if you have to transfer. So it’s a process. Most of the time, you leave at least an hour early before any appointment.

Before the pandemic struck, I was volunteering at a recovery house from 8 PM to 8 AM. I was leaving here at 6:30 at night and getting there about a quarter to 8 PM. That’s how bad the buses are.

I think the biggest thing is it will cost people more time and more money. More time to get anywhere, and then there are additional transfers. We don’t know that it could take three buses rather than two [to get to your final location], which means sitting there waiting for, well, I can’t even think about how long. [It could be] twice as long, it could be one and a half times as long. We don’t know because we have no clue what buses would go where.

We know a quarter of the buses will go by the train station, and two bus stops will remain at Kennedy Plaza. Basically, at Kennedy Plaza, one by the old Biltmore Hotel and one by the post office, I believe. And the rest over to Dyer where Eddy Street and Allens Ave meet.

Years ago, I could walk it. Now with the pandemic and not really going anywhere for the last year, I’m even more limited than I ever was. And even when I wasn’t as limited as I am now, it took a long time [to walk that distance]. It would also cause me health issues because where I had my hip replaced if I was on my leg for too long, that area where my surgery was would go numb. It’s not easy. I mean, I do it. And I did do it. I had a lot going on, and I still have a lot going on. I volunteer all over the place. But now, it would just be so much harder, so much harder with the unknown. The unknown part, I think, is the worst of it.

Can you talk more about that?

They have not said which buses will go where. [We don’t know] what the bus schedules would look like. Whether there’ll be changes in the bus schedules or change to longer times between buses. Like in the evening around 6 PM, they change to a shorter time frame [between buses]. I think the R line goes from every 10 minutes to every half hour on a norm and some that took longer. You had to watch your times because the buses only run so late. We’ve missed buses on a Sunday before because we didn’t realize [the buses] got done so early. It’s just really difficult.

So from your perspective, what is the state’s or city’s reasoning for doing this?

We have a certain somebody whose name I will not even touch that wants the homeless and low-income people out of downtown. It just isn’t right. Kennedy Plaza has been there way longer than he’s been there. I can remember the last time they changed the buses, and I spent time trying to help people who are disabled or seniors who did not know where the buses were going. I took the time to learn almost every bus route to help people because I knew many people would not know.

This is total discrimination against low-income, seniors, and disabled people. It’s not even just that group of people. It’s people that work, but they take the bus because they don’t want to pay for parking. Or it’s just more convenient for them to take the bus. They’re going to lose that convenience. And then they’re going to want to take their cars, and there’s not going to be parking available for them.

[I wish] they would be more open about it and talk to more people. Let people know what is going to be where, or at least give us a rough idea? The way they’re doing it without letting people know exactly what’s going on and or getting more input from people [shows they don’t] care. We spoke with Providence City Council, and they even sent them a letter and said that they don’t think this is a good idea. This is not good for our people. Yeah, and they didn’t care. They were going through with it anyway.

[If it were up to be me, I would] take out those two roads that go in between Kennedy Plaza because that’s a hazardous area trying to cross the streets. Just have that area for buses. I’ve been sitting there waiting for buses in the evening and see cars that go down the bus lanes!

The area by the Rhode Island Foundation is uphill. That can be a difficult walk for disabled people. They need to prioritize pedestrians more in those areas because it doesn’t matter where they put the buses; it’s going to be dangerous crossing the streets.

I spoke yesterday on the whole area’s reorganization plan, not just Kennedy Plaza, but the entire area. They want to draw more people into the city. Well, I think they’re doing the opposite. People won’t get dropped off at Kennedy Plaza anymore, which is a lot of the big draw of bringing people into the city, like Waterfire or the concert series they had every Thursday night in Burnside Park. People won’t want to come to events that run late because then there’s a bigger chance that they can’t get their bus to get home afterward.

It sounds like there wasn’t much thought about people’s actual lives and usage of public transportation.

We’re hoping that once McKee comes in [as Governor], he is more sympathetic to the cause and will, if not stop it completely, at least start the process over, and get more public input. He’s had quite a few meetings with different groups that I’m involved in. He’s had groups with the coalition, with the homeless. He’s taken the time to sit down and listen to these people.