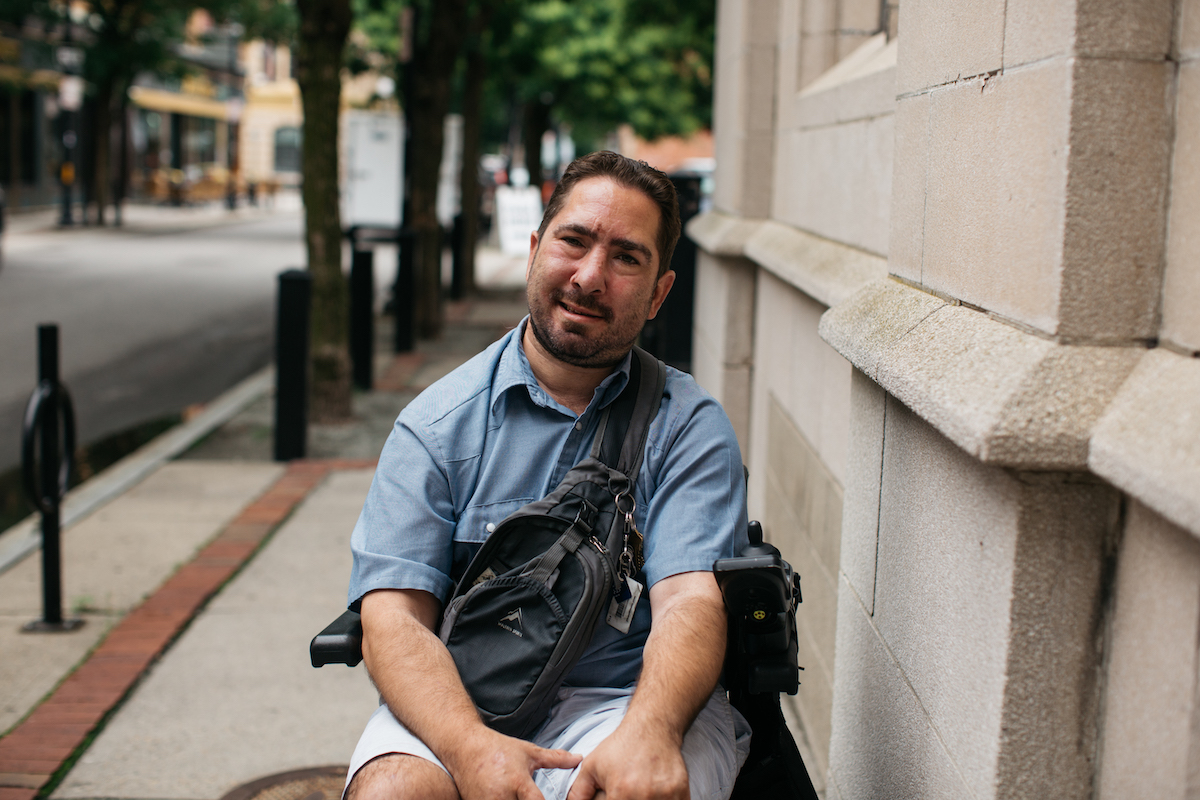 My name is Vincent DeJesus. I live by myself in Cranston, Rhode Island. I work for Advocates in Action RI as a Self Advocacy coordinator, which I started a little more than a year ago, right before the pandemic began.

I take the bus in Providence, but for such a small state, we don’t have a lot of area coverage. I learned this the hard way. My previous job was as a teacher at an after-school program. The place I worked at had multiple locations, one was in North Smithfield. They needed someone to work, so I offered. I called up RIde [Editor’s note: RIde is RIPTA’s paratransit service. Paratransit service provided under the Americans with Disabilities Act (ADA) is available for an individual whose disability either prevents independent use of the fixed route system or prevents travel to or from bus stops. Under federal regulations, ADA Paratransit Service must operate within a 3/4-mile corridor on either side of a fixed route. ADA service operates during the same hours that the fixed route bus runs] because I am disabled. And I looked it up, and there was a bus that went there, but the bus has a limited schedule, like three times a day. I had to work from 3-6 pm, but because the buses are limited, they would get me there at the latest 7 in the morning, and then I would have to wait and do nothing, but then they would be able to pick me up afterward. I use RIde often, but people forget it is dictated by RIPTA’s regular bus schedule.

So because RIPTA dictates RIde, how does it affect your life and your job? It does seem like it’s hard for you to get to your job in a reasonable time.

My previous job was in Woonsocket, so I wouldn’t have to leave my home three hours earlier if I was taking the bus. I would have to take a bus to Kennedy Plaza and then wait for the next bus to Woonsocket. My current job is in Pawtucket, so it’s not as long, and it’s on the bus line.

Well, for me and other people with disabilities, it’s going to make things much harder. Over the years of use, I started getting some severe arthritis in my shoulders, and because I went to URI for college, where there are a lot of hills, I started using a power chair. But many people use manual chairs, and getting from one place to another is going to be time-consuming in itself.

The buses don’t run all the time, so if you want to catch a movie and dinner? It’s pretty much out of the question when you’re in a wheelchair. Like I said before, much of the state doesn’t even have transportation services, and if they do, it is very, very limited. And which also, again, causes RIde to be very, very limited. It’s not really an option. I do use RIde, but they tend to mess up or be a little late. I’ll use them for this gym. But if I have a doctor’s appointment and I’m using RIde, it’s tough to say; I’ll be at the doctor’s at noon and ask them to pick me up at 2 pm, But I could be waiting there until 1:30. Yeah. And if you’re not out in time, they will wait 10 minutes, and then they’ll leave. So, many times, I’ll end up using RIPTA.

I should mention that they want to spread out the bus hubs, and no one knows what they’re going to do about public restrooms. Many stores don’t have public bathrooms. As it is right now, they should use the money to improve Kennedy Plaza instead of reinventing the wheel. The accessible stall does not have a lock on it. There are no changing tables for babies. The bathrooms are important.

Here is a letter Vincent wrote to Governor McKee:

I am opposed to the plan to eliminate 75% of the bus stops in Kennedy Plaza.

Manual wheelchairs are not easy to use in downtown Providence due to the cobblestones. I am worried it will be harder for manual wheelchair users to get from one bus stop to another. I also worry that sight-impaired riders will face similar problems. Right now, transfers at Kennedy Plaza are easy. 90% of the time, I just take one bus in and one bus out to my next destination.

I live in Cranston and work in Pawtucket. Once I return to work after Covid 19, I am worried it could take me much longer to get there if most of the bus stops in Kennedy Plaza are eliminated.

We could improve transportation in Rhode Island by adding more services like the R Line. It runs every 10 minutes and operates later at night. The R Line also has better service than other transit lines on the weekend.