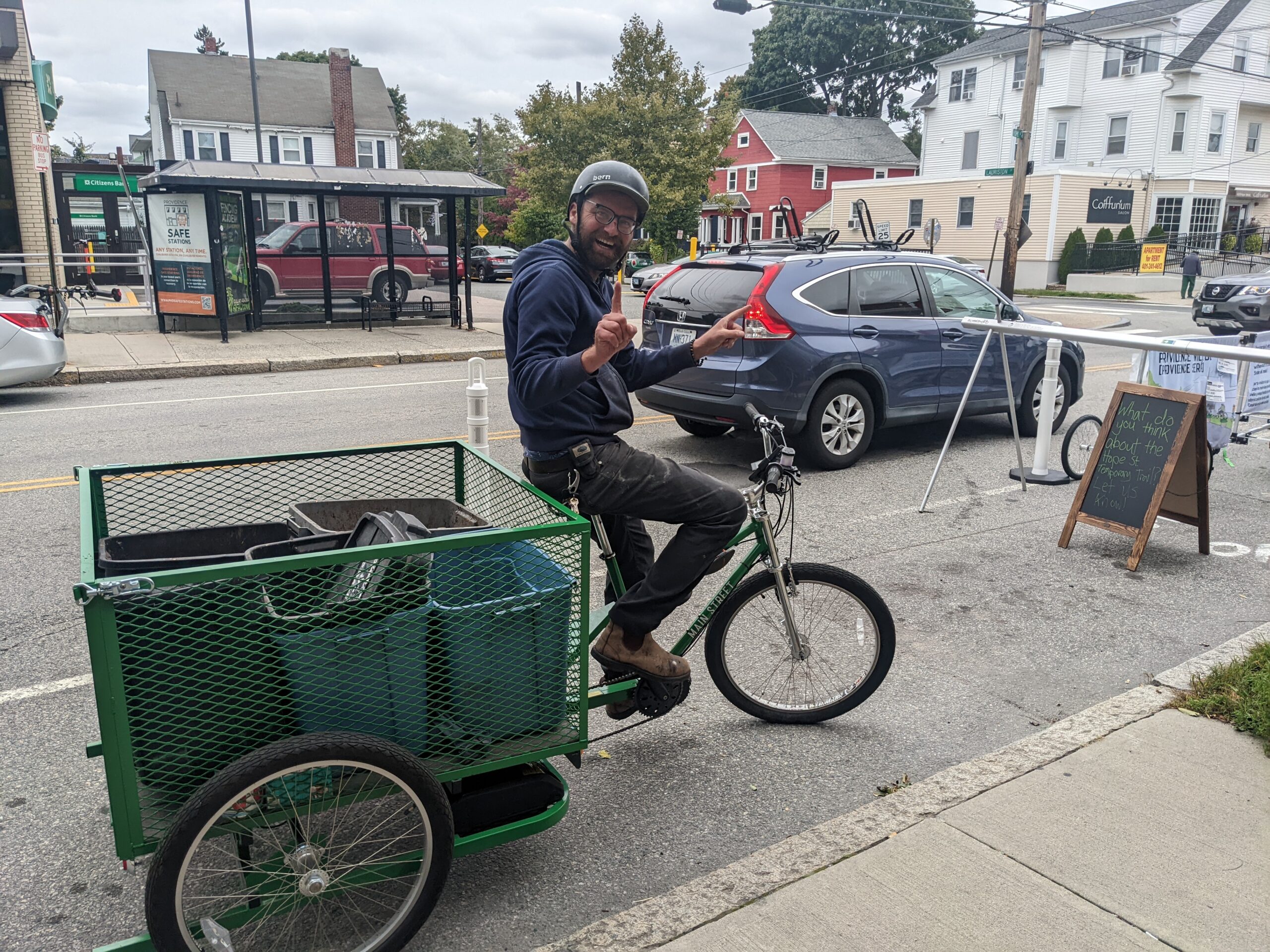 My name is Tyson Bottenus, 36, I live on the West End of Providence, and I am a compost hauler for Harvest Cycle Compost, a community composting project through Groundwork Rhode Island that collects food scraps from residences, restaurants, and institutions all over the city and transforms them into a resource for urban growers in the city. We provide a solution to urban composting that’s pedal powered. We service almost 500 customers over the Providence area without putting another truck on the road.

I travel around Providence by bike, as car passenger, and via RIde, RIPTA’s paratransit service.

In 2020, I suffered an ischemic stroke that I fortunately survived. Doctors predicted that I would be completely blind, but when Liza got a text from me days after the incident, she was filled with hope. While I wasn’t blind, the stroke ultimately impacted my vision by crossing my eyes and reducing my visual field, which limited my transportation choices. I wasn’t able to drive, let alone ride a bicycle. Liza and I were gifted a tandem bike so that she could steer and I could pedal. This worked magnificently until I underwent a surgery in 2021 to correct my eyesight, allowing me to ride a bike by myself again.

While my license is still valid, I do not drive because it would be irresponsible (it’s been 2.5 years since I last drove). Instead, I don’t mind biking everywhere. I have a bike with a big crate on it that I use when I need to buy groceries and I’m so spoiled that I have a second bike that goes really fast so I can bike up to my parents’ house in southeastern Massachusetts every now and then. For work, I use a cargo bike with a trailer that has electric assist which comes in really handy when I have to collect compost on the East Side.

For the last two years, I’ve been commuting down to Kingston to attend graduate school at URI. Since there’s no way I could reliably get to my classes on a bike from Providence, I decided to take transit. Fortunately, RIPTA has a terrific paratransit program that I qualify for called RIde. It’s a really easy system. You call them up the day before your trip, schedule your pickup and when you’d like to come home. They’ll come straight to your house and pick you up and when you’re done, they’ll drop you back off again. Since my classes were pretty straight-forward, I arranged a “standing order” for the days I had to be on campus. They even have an app called Ride Reveal that tells you where your ride is, when your upcoming trips are, and can let you cancel the trip if you need to.

Every now and then I’d miss my ride and would have to take the bus from Kennedy Plaza. For that reason, I’m forever in debt to the Transit App and my WAVE card. It doesn’t matter where I am or how much cash I have in my wallet, I can generally get anywhere I need to.

For all of these reasons, RIPTA is an incredible service that I am forever in debt to. I cannot express my appreciation enough for them to take me wherever I need to go in this state. If more people knew about how to best utilize RIPTA, I think they would use it more.

This city is so small that you can bike everywhere. While separated bike lanes are nice, I think the safest thing that can be done is to have more bicyclists on the road. Encouraging more people to ride their bikes is the best way to increase everyone’s safety. When I drove a car, I used to hate traffic jams but these days, I love when I’m stuck in a bicycle traffic jam.

Knock on wood, but I’m counting down the days until I’m doored again in this city like I was on Wickenden in the summer of 2021. That year I also tripped and fell hard on a cracked sidewalk on Westminster while trying to go for a run. Until we get a series of protected and connected bike lanes and smooth sidewalks, I’ll forever be at risk.

I’ve been biking in Providence for as long as I’ve lived here. I hate being stuck in (automobile) traffic jams and I absolutely hate looking for parking. Plus, cars are so expensive. I don’t mind paying a little extra when I have to go to my local bike shop because I know that at the end of the day, it’s a small fraction of the money that I used to spend at the car mechanic’s shop. Besides, if you invest in some nice gloves and heated socks, you too can bike all year long. I take pity on a certain state employee who said that you can only bike for four months in Rhode Island. It’s just not true if you suit up like a proper New Englander.

To attract more people to ride bikes for everyday short trips, I wish the state would prioritize bike infrastructure as opposed to highways. A protected bike lane is nice but even a painted line demarcating a bike lane helps. A little bike rack is such a luxury and takes just a fraction of space compared to the number of parking spaces you would need for cars.