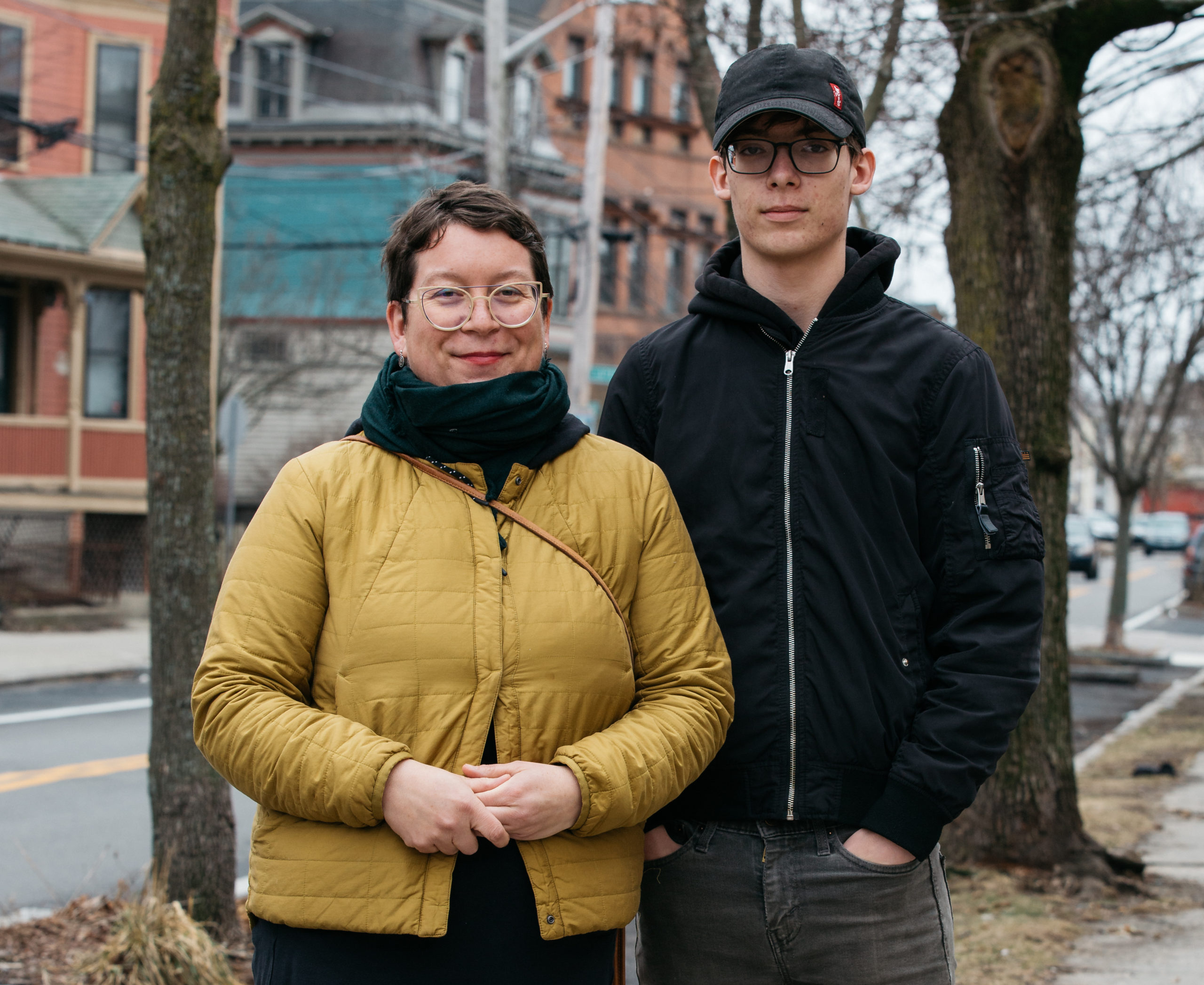 Traci: Traci Picard, 42, I was born in Olneyville and currently live with my family in the West End. I work as a researcher and public historian, and I focus on the undertold histories of Providence, as well as 18th-century medicine and maritime medicine. I am also passionate about urban nature.

Levi: Levi Picard, 17, mountain biker, photographer, bike mechanic, bike commuter. I live with my family in the West End, go to school at the Met on Public Street, and work at Trek Bicycle in East Providence.

Traci: I primarily walk and bus around. It works most of the time, although it can be a barrier to certain areas. Ridesharing has helped with that, but I’d prefer better transit.

Levi: I ride my bike. The only issue I experience is the weather, especially during winter when grip is hard to find out on the road.

Traci: Kennedy Plaza is not broken. I do not support moving the bus hub. It would be harmful to make taking transit harder and especially detrimental to people who take transit out of need, not choice. Honestly, it can be hard standing there at 9 pm in January, waiting 30 minutes for the next #17 to show up. I believe that all decision-makers should actually ride the bus. I also think Kennedy Plaza needs bathrooms that are accessible 24/7.

Levi: I rarely use the bus since my bike is almost always faster, but I still don’t support the idea of moving it or removing it.

Traci: I would love more walkability and more transit. What needs to happen is being seen as a pedestrian, as a person with a right to use the road. A huge barrier to walking in Providence is the idea that streets are for cars. Like, there’s this car-centric narrative that pedestrians and bicyclists struggle to breakthrough, but the streets are for everyone. We also need people to shovel the sidewalks better and stop parking cars on sidewalks-but this requires LOVE for the community, not just enforcement.

Levi: I would like to keep biking, and I want drivers to get out of the gosh-darned bike lanes!

Traci: I feel emotionally safe in this city. But distracted driving and speed sometimes make me nervous. I wish more drivers understood crosswalks and rights of way and could collaborate with pedestrians to make crossing safer. I would also love to bike more, but I worry about being hit by cars. I also worry about other people being hit by cars.

Levi: I feel safe almost anywhere, but there are a few certain blind corners I don’t like, and construction areas always make me nervous because it’s hard for truck drivers to see me near them.

Traci: The City and RIPTA could lead this community towards a mindset that tells us walking is a positive activity. The current mindset tells us that walking, biking, and transit are for poor people and weirdos, and cars are the “good” mode of transportation. But why? It is not this way everywhere, and I believe we can shift this way of thinking towards the belief that cars are not the center of the universe.

Levi: Basically, what my Mom said. It’s the mindset that needs to change before any physical change.