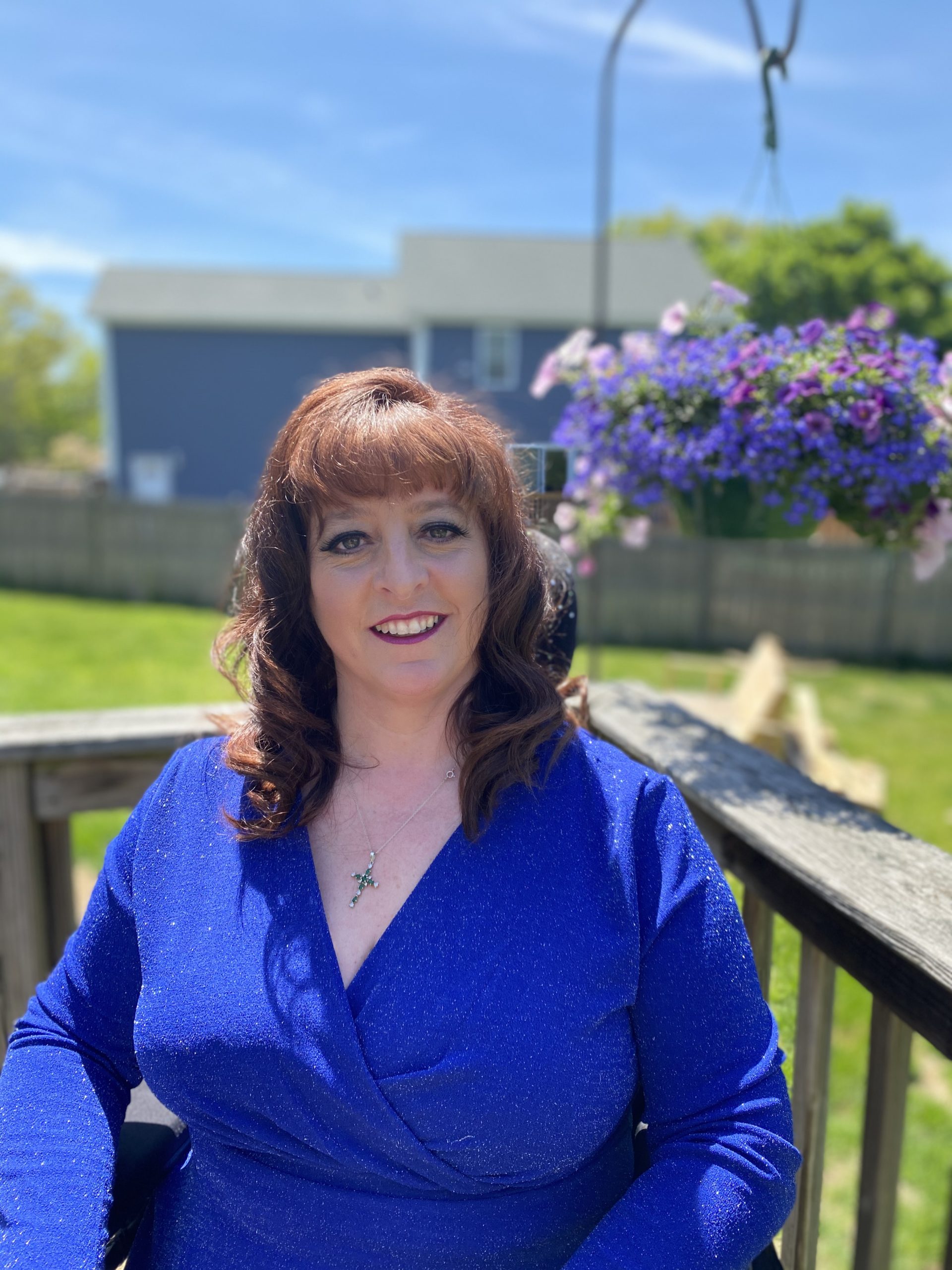 I am Tina Pedersen, aged 48. Right now, I live in Lincoln, Rhode Island, but I’ll be moving into my Habitat for Humanity wheelchair accessible house in Burrillville, hopefully within the next two months. I am the CEO, founder, and President of my own nonprofit, RAMP: Real Access Motivates Progress.

RAMP is a nonprofit organization that’s very different than anybody else. We educate and advocate positively for accessibility and inclusion for everybody. We go around to schools and nursing homes and businesses, and we do what we call “roll throughs”. We ride through in all wheelchairs, and we tell them what they need to change or how they can fix it. But not only do we tell them that, but we also give them affordable real-world ways they can do it. So we can hook them up with somebody who can give them a portable step for somewhere in the vicinity of $100 to $300 that can be movable in and out. Will they be ADA compliant? No. But will they be starting the process of getting more business? Yes. So we give solutions as well as ideas of how we do it.

I’m a four-time cancer survivor, who six years ago, walked into a very minor surgery. Ten minutes into the surgery, I suffered a stroke to my spinal cord. So when I woke up, I had no use or feeling in my legs. In the blink of an eye, I was thrown into this wonderful community called the disability community. I didn’t realize when I was walking how inaccessible our world was and how much I was missing out on just on the fact that I couldn’t get in. I had two choices, roll in a ball and cry about it and be sad about the way my life turned out, or suck it up and move on and help other people. So obviously, helping other people was more beneficial to me and everyone else. That’s where RAMP got founded. At that point, I wanted to find a way to help as many people as I could become accessible because if anybody else or a loved one ended up in this community, the world is already accessible, it’s one less barrier they have to deal with.

How do you typically travel around? Is that working for you? How does it affect your life, your job, your family?

I utilize a motorized wheelchair to get around in my daily life. It took me a year and a half to get out of my own home because we rented our house, and our landlord didn’t want to have ramps outside the house and make it look accessible. It took me a year and a half to find an affordable way to get out of my own home. Then it took me another year and a half after that to get my license to drive with hand controls and then get a vehicle that I could afford. We ended up having to do GoFundMe to get a vehicle where I can now get out and about on my own. This is what RAMP raises awareness for. There are limited funds out there and limited ways of getting vehicles and getting what everybody else takes for granted. There are not many buses that the motorized wheelchairs fit on, if any at all, or getting to the bus stop. And then you have the RIde program, but they only do certain areas close to a bus stop, which doesn’t do anything. If you don’t have an accessible vehicle or one in the family, you’re kind of stuck. You’re homebound, and that’s no life for anybody to live. It’s a reason why RAMP is so crucial because we raise awareness of people who don’t understand how inaccessible the world is. I don’t believe anyone is maliciously unaccessible. I just feel that they don’t realize what isn’t out there for people. I shock at least one person a day when I tell them what isn’t accessible, certain things they can’t get into, or what’s not available for disabled people.

Can you talk a little bit more about the RIde program?

You can only use the RIde program if you fit the criteria, and if you are three-quarters of a mile from a regular bus stop – well, that’s not great. When you live out in Burrillville, there are no regular bus stops. When you live out in Newport or South County, you’re not near many bus stops, so now you’re trying to limit where we live. And it’s not conducive to our lifestyle, and why should we have to move to have a conducive lifestyle? Rhode Island is 45 minutes sightseeing, from one end of the state to the other. Why can’t the RIde program just cover the entire state? It’s simple things like that that people don’t think about. If I was in a manual wheelchair, I have a better shot of getting on a bus because some buses have platform access. But they’re not sturdy enough for my 350-pound wheelchair, which is not counting me on it. I have to call for a special bus and hope the bus has availability or will even show up. We’re New England; it could snow any given day of the year. It can rain. The weather can change in a heartbeat. If I’m at a bus stop with my motorized wheelchair and it downpours, I’m in trouble. These are the types of things that people don’t understand. Or there are no curb cuts anywhere. There are a lot of bus stops I can’t even access because there are no curb cuts. There are so many access points that people just don’t realize that not everyone can reach.

The one thing that many people don’t think about when it comes to accessibility is that for everything you do to better one person’s life better; you’re actually making it worse for somebody else. Just think of the curb cuts. When they made curb cuts for wheelchair users, it was great, but now the blind were walking right into the street. They didn’t know when the sidewalk ended and when the curb cut was, so that’s when they decided to put the bumps on it. Those are for the blind, so they can tell when they’re on the sidewalk or the road. You have to think about the process all the way through.

They were putting the deaf symbol on the cars of the people who drive who are deaf. They put a symbol of an ear with a line through it, but now it was telling the general public that the person driving this car can’t hear you sneak up on them. Now you’re making them vulnerable to people who want to steal their car, so they had to come up with another way and got rid of that. Now there’s a light in the vehicle that goes on when sirens go off, so the driver is aware that something loud is going on around them, and they can make adjustments. It’s thinking the process all the way through.

Tell us about your activism work.

I’m on the Governor’s Commission on Disabilities as their Vice-Chair, and I’m also the chair of their Awareness Committee for the state. Before COVID, we were at the State House at least two to three times a week. Now we do it all through Zoom. We are there, making new laws and making changes. People don’t realize if you’re in a Walmart parking lot and you’re in a handicap spot, they will fine you $250 if you’re caught. But what if Walmart decides that they don’t want to fine that customer? It’s their private property; they don’t have to. So that sign in that parking spot is basically useless for somebody who absolutely needs it like me. We’re trying to hold and make those signs accountable.

There need to be new laws of when you’re building a new home, that putting a wheelchair accessible apartment on the 15th floor is not the best idea because the first thing that’s going to go down in an emergency is the elevator. You’re telling the person: you can live here, but if there’s a fire, you’re going to die here too. I don’t find many firefighters trying to find you and get you out of the 15th floor in your wheelchair. We have a bill going on now that there have to be first-level wheelchair-accessible apartments for all apartment buildings. We’re trying to get that passed right now. The way the law is written, 4% of the apartment building has to be ADA adaptable. Adaptable is not accessible. Adaptable means they can make that one apartment in that whole building for somebody who’s hearing impaired or somebody who’s autistic or somebody who has Down syndrome, but that doesn’t mean it’s wheelchair accessible for a physical disability.

It took me two and a half years before I hooked up with Habitat to try to find a place to live. And I have connections with Congress members and Senators, and I had 14 realtors looking, and we couldn’t find an affordable, accessible, wheelchair accessible place safely for me to live. We’re building a fully wheelchair accessible home with Habitat to show everybody exactly what you need to do to become wheelchair accessible. We are also learning things that construction people do for no reason. For example, when a deck is built with a step-down. Why? If you make the deck even with the door, that’s one less place that someone had to use crutches, a knee scooter, a baby carriage; it could be one less place that they wouldn’t have to struggle. Every single construction company I’ve talked to says that is just the way they’ve always done it. Well, let’s change it! Let’s make people aware that if you built it flush, that’s one less thing that people had to make accessible later on.

Providence is very inaccessible. Take Federal Hill; there’s only one restaurant I can dine in and pee in on the entire street. Because they all have that inevitable one step that a wheelchair can’t get in. Some people are like, “Oh, we’ll carry you up that one step.” Well, number one, if you’re going to carry me in, you got to carry me out. If there’s a fire or shooting, are you going to stop to get me out? No. So I’m going to be trapped. Two, the liability of you lifting me and my 350-pound wheelchair, you will get hurt, I will get hurt, you break my chair, that’s not worth the risk. It’s something they can fix with a $200 portable ramp that they can bring in and out whenever they wanted to. That would be safer, more convenient, and more dignified. It will bring in more customers. Because when I go out, I bring all my friends. You’ll get that person with a walker who will bring friends. There’s disabilities when people can’t lift their legs, or they had hip surgery, or they had back surgery, and they can’t lift their leg. So not only are you inaccessible to wheelchair users but a good portion of the public. We’re begging you to become accessible so we can give you our money. How sad is that? We’re begging for you to be accessible so we can give you money.