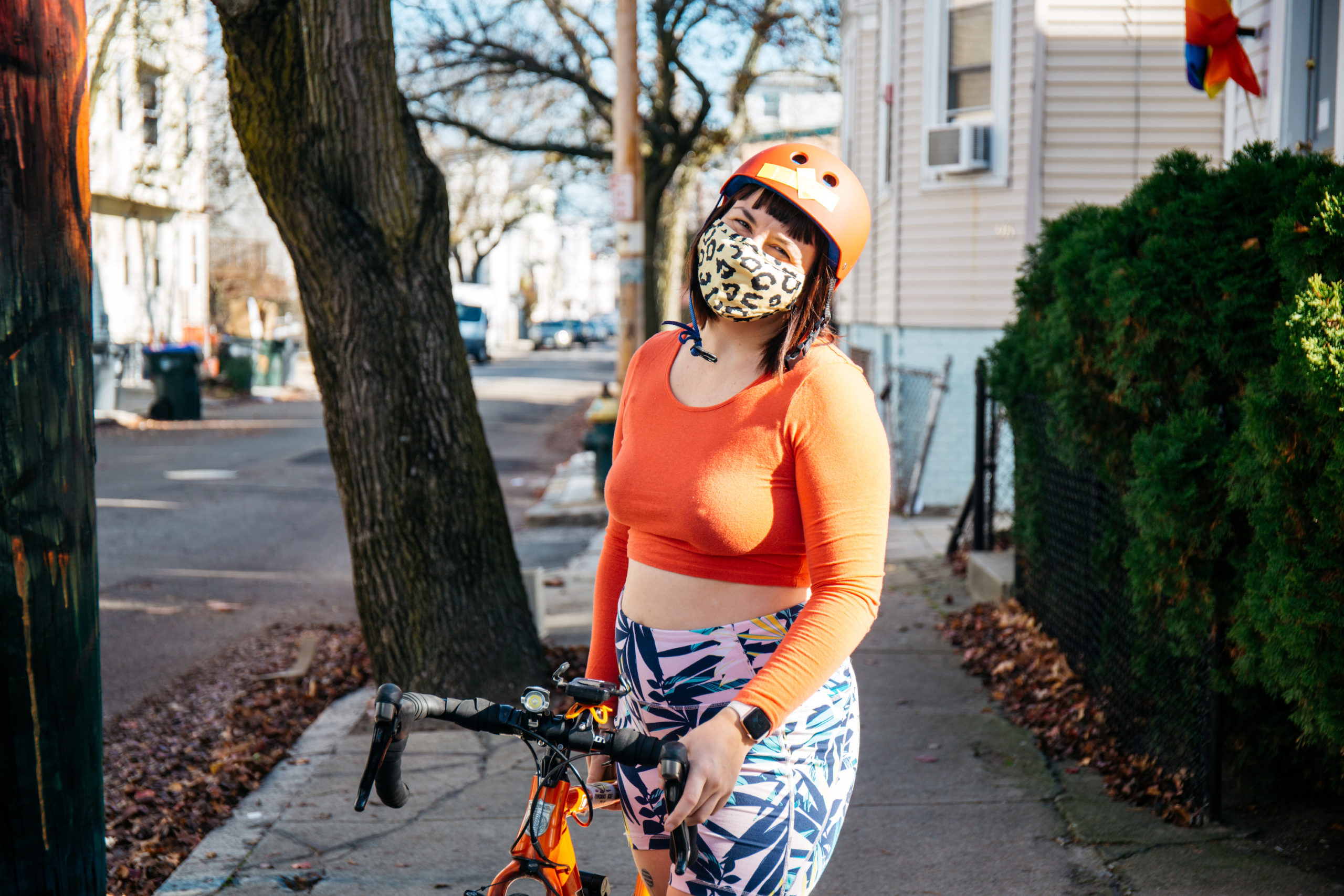 I’m Sam Radov, 34, nonbinary, queer, white, and I live in the Federal Hill neighborhood of Providence.

I study at URI, where I’m finishing my BA in sociology and community planning. I’m currently applying to a few law schools in the area where I want to focus on the parts of law involved in public service, LGBTQ rights, human environments, government, and policymaking.

My activism is informed by environmental and racial justice. Evidence has shown white supremacy and colonization’s most severe negative impacts on BIPOC. I focus on preventing and ending homelessness, increasing access to affordable housing and “alternative” forms of transportation (walking, biking, and public transit), in addition to supporting any initiative that’s working to make Rhode Island an equitable and sustainable place for all its residents.

I use a mix of public transit, walking, and biking to get around Providence. And while I do not drive, I will occasionally get rides from friends or use a ride-sharing service when the weather’s bad or in a pinch.

I like riding on public transit and deeply appreciate our state’s bus drivers (and behind the scenes planners). The trip times have been more consistent with their schedules and live tracking updates in recent years in a way that has markedly made my life easier. I enjoy walking around Providence. It’s a very walkable city, thanks to its design during a time before cars were invented. But most of all, I love riding my bike around Providence, even though it’s by far the most dangerous way to travel. I love it because it makes me feel embodied and strong, and I get a dose of “free exercise” when commuting. The only reason I feel safe to ride around Providence is that I have had access to the resources. A friend gifted me a high-quality bike with expensive components that fits me perfectly. I saved up and collected copious amounts of gear: from high visibility clothing to bright lights and foul weather gear. I am familiar with my rights as a cyclist, and I’ve taken smart and defensive cycling classes. I feel safe on the road because I’m easy to spot, and I know when and where to take up space to prevent myself from being sidelined.

Ideally, I’d like to get around by combining subway/light rail use and bus use with biking and walking. A strategic transportation plan and federal and state-level funding to create a public transit train system for RI would be essential. To create a metro system in RI, we would need the opening and changing of thousand of RI’s minds and hearts. To make a much more serious commitment from almost everyone from elected officials to grade school students in creating a truly sustainable future for Rhode Island. We would need to educate people to break up with their attachment to their cars and develop an investment in their futures and our collective futures and well being.

That being essentially a pipe dream in this part of the world, more pragmatically, I’d like for the state and community of Rhode Island to break up with its image of public transit as only being a thing poor and older adults use. We have a deep sense of classism in this state against public transit. That had led us to be a state that drives more per capita, despite being the smallest state, than almost any other state in the nation. Our state is small, and most trips people would need to take are short. With more funding to be invested in RIPTA to make fares cheaper for low-income folks and increase trips and educational and corporate partnerships to provide bus passes to students and workers across Rhode Island, we’d see an increase in ridership. Hopefully, a destigmatization of public transit and other forms of “alternative” forms of transportation. To help with this plan, I think it’d be prudent for all of those who work at RIPTA and who vote on city and state planning budgets to ride RIPTA as a part of their modes of transportation and as a part of their jobs. To be required to use the systems they help design, fund, and run as some of the decisions made by said leadership are being made by people who clearly have never chosen to ride the bus or have been in the situation of having no additional option other than to ride the bus. I think this would help these leaders understand what it feels like to use transit, etc., and make better-informed decisions. For example, the multi-hub plan to dissolve Kennedy Plaza, the Governor, Director Alviti, and Mr. Paolino have pushed onto the radar in recent months. Never has a lack of understanding of what it’s like to be a transit rider or lack of compassion for poor and low-income Rhode Islanders been more clear from this state’s leadership. I genuinely believe that if the elected officials and leaders of RIDOT and RIPTA and the City of Providence actually rode public transit and used the other “alternative” forms of transportation as their only means, even once in a while, they’d never advocate for such a harmful and cold-hearted plan. Unfortunately, these folks have been in positions of privilege for so long they indeed can’t even see or have chosen not to see the harm in making such decisions.

What would make me feel even safer on the road is if the city installed more bike lanes and trails that connect and cross the city via the routes people are already using—especially protected bike lanes. I’d also like to see the state connect the many disparate mixed-use paths for riders to commute across city and county boundaries with more ease. In addition to riding public transit like the rest of us, I think it’d be productive for elected officials and decision-makers to ride a bike as a means of transportation, if they can, to know how unsafe it feels to ride in many parts of Providence.

I think there’s a lack of stop signs, speed bumps, and well-marked crosswalks across the city.

And I think that the detachment many elected officials and decision-makers have from riding a bike, walking, and riding public transit, the primary forms of transportation poor and low-income Rhode Islanders use, make all Rhode Islanders inherently less safe. Less safe is a community at the end of one of the worst years we will ever know as a people, and intrinsically less safe as we head into an even more uncertain future with ever-rising seas, worsening storms, and natural disasters. This detachment to the most vulnerable people and the environment will only contribute to a more uncertain and dangerous future.