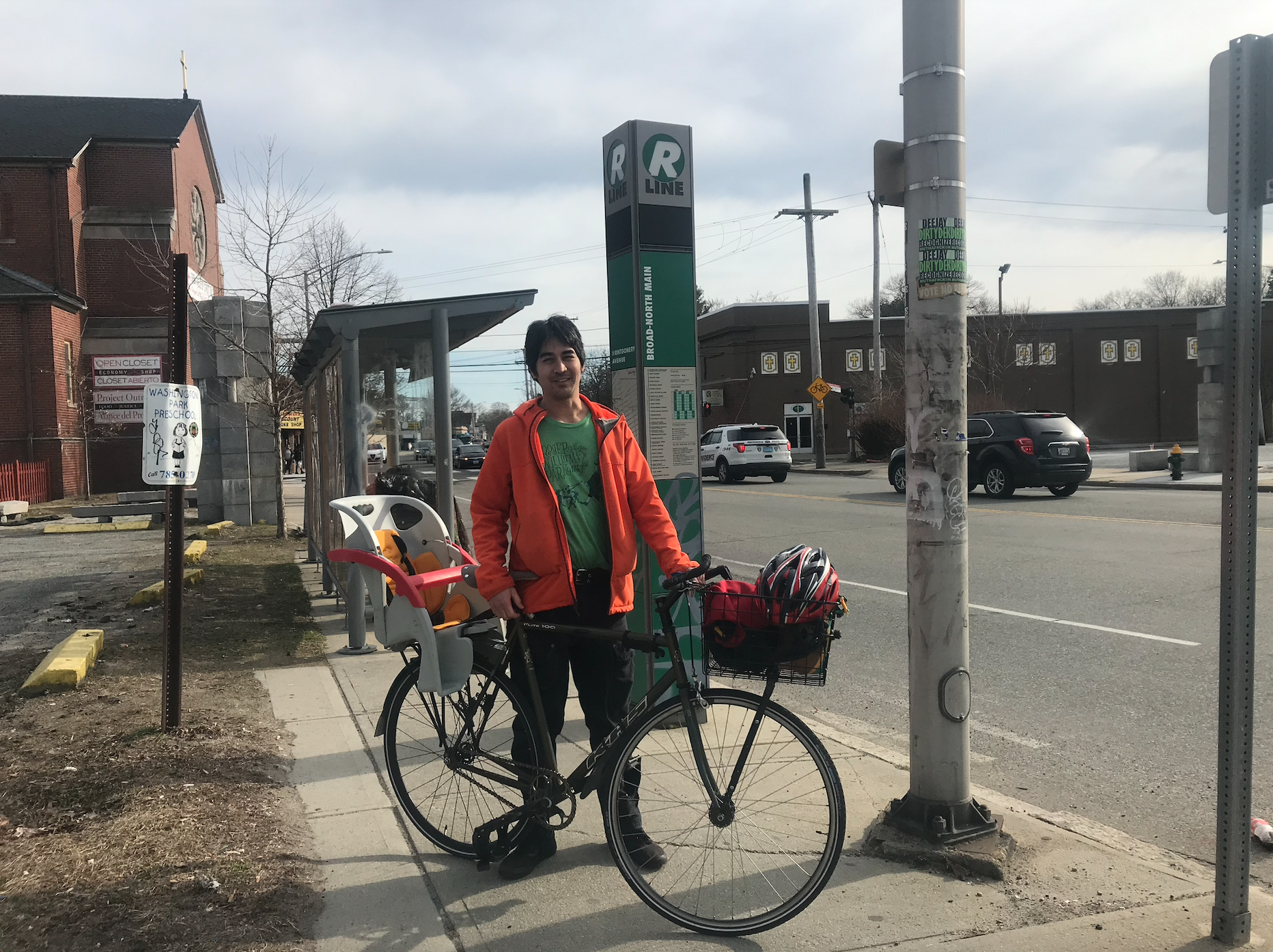 Street Stories are Providence area residents’ stories of safety and mobility, now told by Justin Cole. Want to be featured in a Street Story? Get in touch!

Mike Eng, 39. I live in Cranston right near Roger Williams Park. I live with my wife, our toddler, and a cat. I do software design and user research. Currently working on a project to help Medicare beneficiaries make use of their Medicare claims data.

By bike, car, and bus. I try to bike as much as possible since it’s a great way to build some activity into my daily routine and it puts me in a better state of mind for the workday. I used to ride to a coworking space for work, but the COVID pandemic put a halt on that at a couple of points when there were surges, so it has been tough to find the motivation to exercise otherwise.

I would love to be able to safely bike to more places with my toddler. There are places where I would ride solo but don’t feel safe riding with him. Sometimes we will do a combined bus and bike commute, which is a good workaround to avoid some of the streets I don’t feel safe taking him on. However, the bus schedule can sometimes be unpredictable. More protected lanes and more conscientious drivers would give us more options to ride. COVID rates also stopped us from taking the bus for a while. As long as there is continued decline in rates and generally lower risk, we will take the bus when we can.

It’s a mix. Some streets where cars travel slowly like Prairie Ave. are pretty good. And of course bike lanes (on-road and protected) help a lot in establishing a space for cyclists. The bike / pedestrian lanes in Roger Williams Park have made me feel much safer there.

I’ve been hit by cars four times in Providence while cycling and following the rules of the road. Luckily, I have not been injured badly, but my bike got totaled once by a driver who pulled out onto a street and didn’t see me coming. Streets with fast moving traffic, especially two lane roads or very wide single lanes, are pretty intimidating. Main Street comes to mind as a particularly unsafe street. Broad Street is a little tricky with the unpredictable driver and pedestrian behavior there, and I think adding the protected lanes and pedestrian and transit improvements will bring more visibility and safety to all modes of travel.

I know many people who would like to cycle more but will only ride on protected lanes or off-road paths. I am hopeful that they will have more options to do so with future improvements.

Better real-time bus location data. I’ve used Transit App to try to track RIPTA buses, but the data is often very inaccurate, so I stopped relying on it.

And more courteous bus drivers. I’ve had some pass by me without stopping when I’m at a stop with my bike (the bus did not seem to be at capacity) or get impatient and honk while I’m loading my bike on the rack on the front of the bus (it takes about 30 seconds).

I think it would generally make things more difficult to decentralize and require connections that span greater distances. With the routes I typically ride though, it would honestly not be a big impact for me.

What do you think is the best way to attract more people to ride RIPTA?

Better social supports for people struggling with addiction. I know this is a broader problem than just transit, but often folks at a higher level of functioning and socio-economic status are shocked to encounter folks struggling when they ride RIPTA, so these people avoid riding RIPTA and avoid these encounters when they have the choice to.

I moved here in 2006 to attend college and wasn’t able to bring my car, so my bike became my primary mode of transportation. I found that the scale of Providence made it fairly easy.

Safe bike infrastructure. I think safety is the main barrier for most people.

How has Providence’s efforts to increase biking, walking, and transit use affected your driving experience or habits?

As a driver, I get nervous about cyclists weaving in and out of parked cars when there is no designated lane, so I appreciate cyclists having their own space!

What would you like to see changed about driving in Providence?

Better driver education and reasonable enforcement of traffic violations. Many drivers seem to not know (or care about) the rules of the road or have different interpretations of what to do when making a left turn at a green light without an arrow. Sometimes drivers stop on a straightaway out of courtesy for someone turning, but the unpredictability of things like this makes it feel more dangerous to travel.