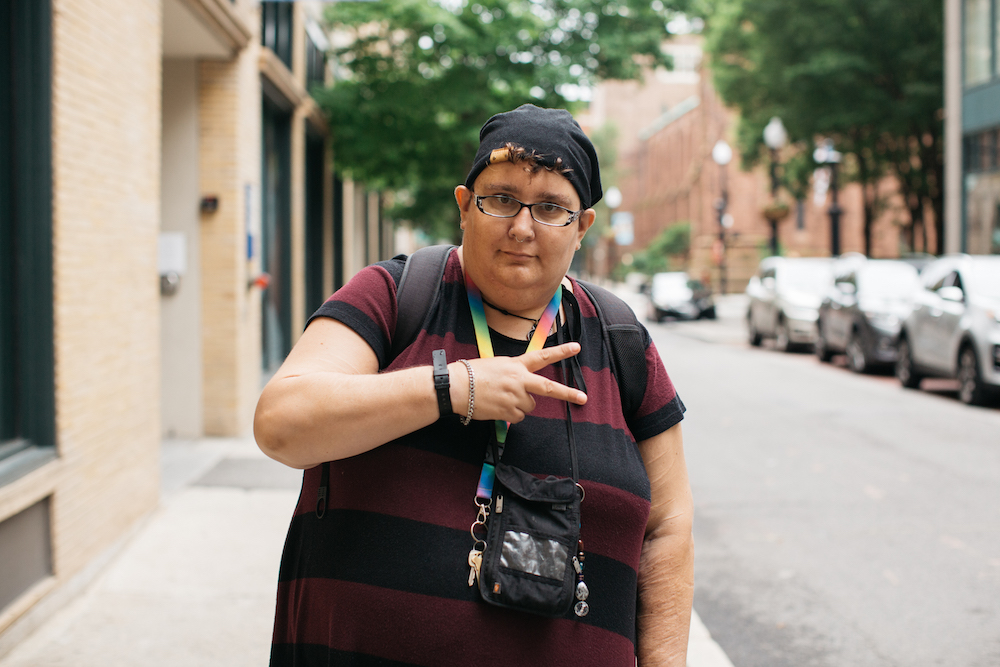 My name is Mel Fundakowski, and I’m 43 years old, and I live with mental health issues. I live on the Pawtucket/ Providence line off of N. Main Street. I take care of myself. I’m starting my training to be re-certified as a peer recovery specialist. And then later on in the year, I’m going to be doing my certified community health worker training.

I travel by bus, and I have a unique situation. I live about two or three miles from my work. I volunteer at Butler Hospital, and I have to go all the way from Ninth Street on N. Main Street to Kennedy Plaza, and then from Kennedy Plaza, back to Butler. I wish that there was a way that I could go straight from my house to Butler. So that’s a challenge for me because it takes an hour out of my day just to travel to work.

How does it affect your life or your job?

I’m going to say something very candid. I have IBS. So I always need to be near a bathroom. And when I’m waiting for the bus, usually they’re cleaning the bathrooms, so that’s really difficult for me. And in the wintertime, when it snows, they are very poor conditions at the bus stops, and they don’t shovel the bus stops all the time. And they have a surface of ice or snow that piles up on the curb. Trying to get on the bus is a feat in itself. I am petrified of the winter coming because I will have to walk on North Main Street and risk getting hit by a car to get down to Butler Hospital. I wish that they would shovel a walkway to get to the bus stop and that they would shovel the bus stop so people can sit down and wait for the bus and not have to worry about falling when they get on the bus. It’s a very big issue for me.

It’s going to affect me immensely because I have so much anxiety, first of all, being on the bus. Second of all, they’re going to misconstrue places and be like, “Oh, you have to come here to get on this bus and here to get on that bus.” It’s like, “Where do I go? Which one? Do I go when? What time is this going to happen? Is it going to coordinate with my schedule?” Like, I’m a very busy person, I have a lot of doctor’s appointments, I have a lot of medical issues, and not being able to navigate the bus system efficiently drives me bananas.

A lot of people have physical issues, and I have physical issues. I need to be near a bathroom, and they are cleaning the bathroom at Kennedy Plaza eight out of the ten hours that it’s open. Now they are putting the buses at places where there’s no bathroom. That’s a mess. That’s not going to help anybody who’s trying to connect from a bus. If you were on the Newport 60 bus and you’re coming from Newport to Providence, you’re going to want to use the bathroom. And if it’s not open, what the heck do you do? Squat in an alley? That’s unbelievable. They need to have more bathrooms at different locations in the city because what’s going to happen is that people will be squatting behind dumpsters and getting arrested.

There does feel to be like a real lack of humanity in this. I’ve recently realized the trash pile up and Kennedy Plaza; back in the day, they cleaned the area and have people going around picking up stuff. Now you get off the bus, what do you see? Trash everywhere. Somebody could get a job figuring out the trash situation.

This will take away the freedoms of many people because they’re not going to know where to go, when, and what bus to connect to. It’s just so confusing. I hope that people in charge understand how much anxiety this will cost people. I’m just praying that they don’t move the bus hubs. It will be so confusing and arduous for people to get where they need to go.

Well, I wish that they had a flex bus going to Butler Hospital. Because if they had a flex bus, that probably cuts my time in half of what I have to do for traveling. So if they could have a flex bus that runs to the East Side, that will be perfect. Also, the bus drivers could be more understanding of people that have balance issues and need to get their seat while the bus is stopped.

Sometimes I do. Sometimes I don’t. Sometimes the bus drivers can get pretty erratic and take corners sharply, and that scares me. It makes me very anxious, and I have to hold on to the seat in front of me to feel safe. I need them to wait for me to sit down when I get on the bus. If they don’t, I’m going to end up falling, and then it’s going to be on their heart and their dime if I fall because they decided that they weren’t going to listen to me about waiting for me to sit down.

Well, they could be more courteous and could make things less confusing. I think if they move the bus stops, it will make everything so confusing.

Is there anything else that you want to add?

I just hope that my testimony is heard. You know, I hope that things are understood.