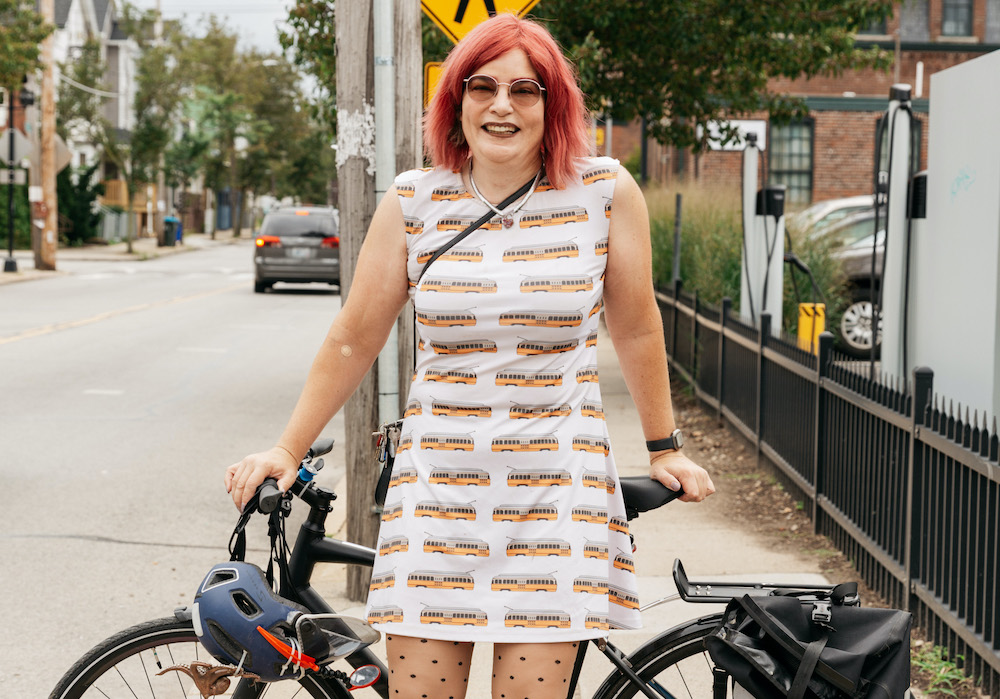 Daria Phoebe Brashear, 48. I live in Federal Hill with my wife and chosen family and have for three years. I have lived most of my life in Pittsburgh and have also lived in Somerville, MA, and Oakland, CA.

After 13 years of not owning a bicycle, I have spent the last 16 as a frequent cyclist. I work for AuriStor, Inc and have for 13 years, doing software development, and have not had an office since 2005.

I use a combination of cycling, walking, driving, and bus, in about that order. I would prefer to drive less than I do, but weather, division of neighborhoods by highways and thoroughfares, and insufficient transit service in scope and hours sadly prevent me from achieving that goal.

The answer I gave the Imagine Downtown survey sums up my feelings on the proposed changes, namely “While it is an issue that Kennedy Plaza has folks with no place else to go, that issue cannot be solved by chasing the folks deemed undesirable elsewhere. I recognize that the problem of un- and under-housed people is out of scope, but build the space we deserve regardless of whether the current unmet needs of folks will exceed the intended scope of your design.”

More practically, we lost the minute the train station was moved from Union Station to the new site adjacent the State House: we no longer have a single interchange point downtown which can serve as all of a bus transfer point, access to the largest commercial district in the state and within southeastern New England, and transfer passengers to and from the regional and national rail network. The Downtown Transit Connector plus the current Kennedy Plaza bus transfer is the best we’re going to do. We should not further squander the remaining opportunity.

I have considered adding some subset of a cargo bike, an e-bike, or a trike to the set of human-powered vehicles I have, and if I wind up living further from downtown, I expect I will do so. The promise of protected bicycle corridors would make it much more likely that I can do this and possibly grow my non-car travel share even with longer trips for the same tasks. More safe travel spaces for cyclist and pedestrian travelers would help greatly, and businesses that seek to limit them effectively tell me they do not want my, or my family and friends, money and business. I noted even opposition to Slow Streets and have stopped patronizing businesses which are not interested in ensuring my ability to get to them safely.

I feel somewhat safe. I have adapted my trips and travel to follow lower-stress corridors even if the lanes are not protected, or the sidewalks are occasionally broken or cluttered. Spaces near freeway entrances, places where roads are configured to motor vehicle lanes from one edge of the pavement to the other, and anywhere traffic is sufficiently free-flowing that the large number of aggressive drivers are unencumbered are a problem. Federal Hill is effectively surrounded on three sides by freeways with routes 6, 10, and Interstate 95, which limits travel options. We also call the area in the triangle approximately formed by Route 146, North Main Street, and Branch Avenue “The Triangle of Death” because of the incredible dearth of safe options for travel other than in a car.

More bus service on most if not all routes would be incredible. There is a tradeoff to be made between better (frequency and hours) service and cheaper service as long as money is scarce, and while I believe trips should be subsidized for people who need that help, continuing to charge people who can pay and providing them the trips that will enable them not to drive will do more to make transit truly viable for everyone.

Building and retaining cycling and walking infrastructure instead of falling over the minute someone complains would go a long way to getting improved options for active transit. People have been shouting that Kennedy Plaza changes will be a problem, but they continue to be considered. The far more limited resistance to bike lanes, particularly, is instead taken seriously, when things should be just the opposite in a place which will be, and recognizes there will be an impact from, climate change.