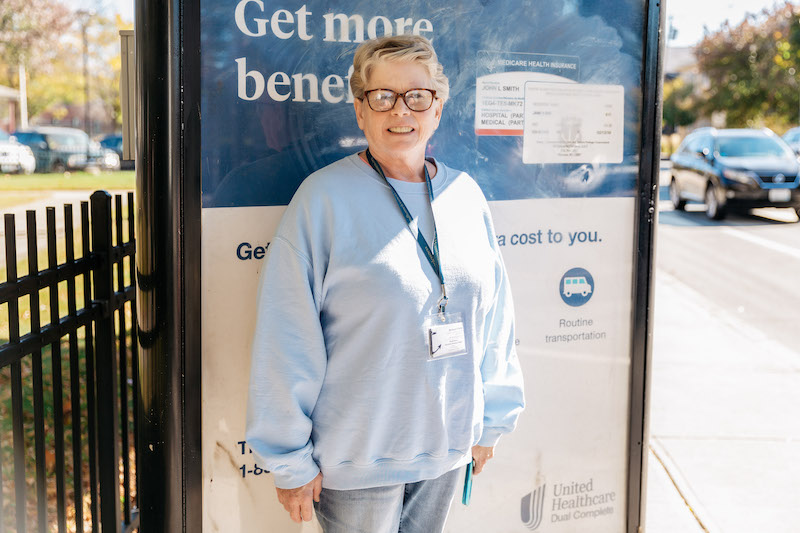 I’m Barbara Freitas, and I am 62. I live in Smith Hill, and I live with two roommates, a mother and son. I volunteer as the director of the Rhode Island Homeless Advocacy Project.

How do you typically travel around Providence? Is that working for you? How does it affect your life and job?

Well, I take the bus. For the most part, it does work. When I go on different routes, like, for instance, taking the 1 bus going, it gets more difficult. But the 56 and the 57 that go on Smith street are pretty good. If they’re late, or on a Sunday or holiday schedule, it definitely impacts shopping, or if I have to go to the doctors or the emergency room. It affects whatever I have to do.

I’m totally against it. It’s scary to know that [the city of Providence] is trying to do it. Because it will disrupt my life, and it will disrupt the people that I work for. I work for a lot of homeless, and that’s their main way of really getting around. And, you know, especially when they have to go to shelters. [There is] one in Cranston, and if you missed the last bus there, you’re in trouble. You’re stuck at Kennedy Plaza for the night.

How would you ideally like to get around Providence? What would need to happen to make that a reality?

I don’t feel as safe as I used to down at Kennedy Plaza. I think that especially getting late at night or super early morning, [can be] dangerous. I’ve never really felt that way until maybe in the past year or two. Even when I was doing homeless outreach, we would be out late at night, and I never felt like I was in danger. But now, it seems like there is no security at all. And I think that as I get older, I know that I’m not going to be able to run fast. So I think a lot of people my age and older feel the same way.

How could the city of Providence or RIPTA improve your experience getting around?

Making the buses more frequent so that people wouldn’t be hanging around as much at bus stops, because when you’re there for so long, not all the bus stops have seating. We’re not there to dilly dally; we just want to get to our places. I think that is my main concern. Also, maybe having more security go to the bus stops and just check on people making sure that things are okay. That would be nice. Plus, more security at the bus stops that have been a problem, where people have gotten hurt or beat up.