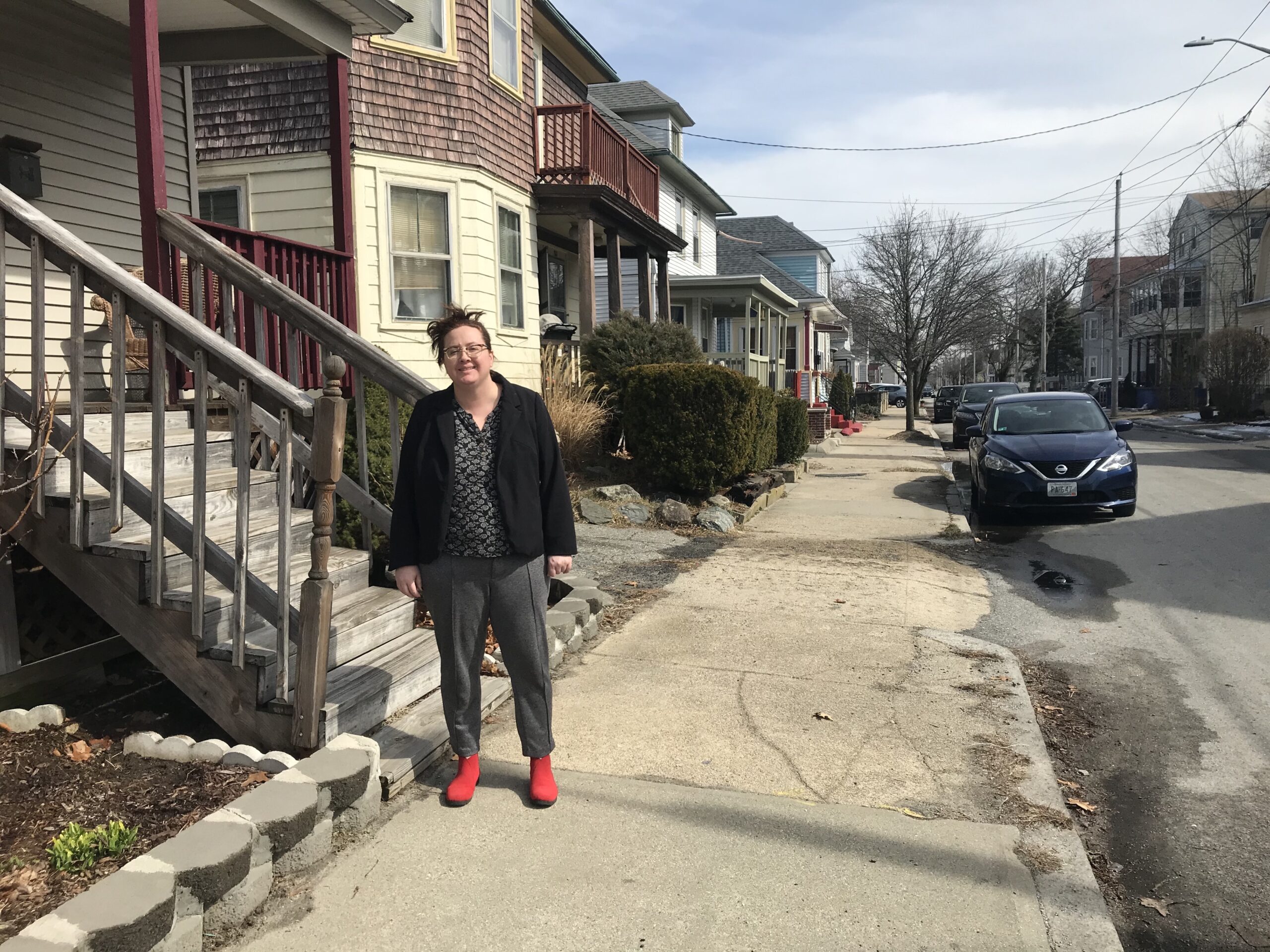 Street Stories are Providence area residents’ stories of safety and mobility, now told by Justin Cole. Want to be featured in a Street Story? Get in touch!

Name, age, any personal identities you feel like sharing, neighborhood where you live, type of work you do or hope to do.

My name is Amy Glidden. I am 35 years old. She/her pronouns. I live on the South Providence/Cranston line in Cranston and use the R-Line. I am a special education teacher.

How do you generally travel around Providence?

Typically by bus. I do get a ride from my husband to work in the mornings, because I’m not a morning person– so there’s no room there. Then I’ll get out of work, take the bus home. On the weekends, I’ll take the bus out to visit friends and go down to Providence. I love the R-Line because I can take a ride from my house, get off on Empire Street, and then a lot of great restaurants are right there. When you’re done for the night, you just hop right back on the R-Line and go home. I actually bought a house in the area because it was on the R-Line and I wanted to be on the fastest line.

How would you ideally like to get around Providence?

Yeah, so a couple things I’d like to see: As a Cranston resident, I’d love to see a line going across Park Ave to connect the two different parts of Cranston. As someone who goes into Providence, the R-Line could truly become Bus Rapid Transit by just adding those bus only lanes, because we already have the signal priority, the frequency of service, but in order to truly turn it into bus rapid transit, we would need to have the bus only lanes as well. North Main, where the other segment of the R-Line comes from, is a perfect place for bus only lanes as well. No need for parking spaces there.

Do you generally feel safe while using RIPTA?

I feel like sometimes people kind of shy away from the bus, because they’re like, “Oh, homeless people are there,” or, “I’ve heard they’re struggling in the area,” or something, but I feel like that’s part of living in a city. And if people are saying, “Oh, I don’t want to interact with homeless people,” you know, what is that saying about them? They’re part of our city and they deserve a nice bus experience just like everyone else– and there really could be more amenities for homeless people downtown, you know, a social place where they could get social services. Kennedy Plaza is the place where everyone is, so it’s really the perfect place to bring services to.

Which obviously brings me to the Dorrance Street hub. How is that plan going to impact your daily transit life or the lives of people you know who ride transit?

I think that there are still a lot of questions that really need to be answered about the Dorrance Street hub. A traffic study has not yet been conducted, which I think is really key and we in the transit community would be wanting to see things like impact studies and traffic studies, both, before we could really endorse a project like that. I do like the idea of an indoor facility and that all the transfers would take place in that facility, and that there would be a five minute service through the downtown transit corridor to Kennedy Plaza.

I think there’s something of a missed opportunity there because I think the downtown’s transit corridor could be potentially free. RIPTA is doing this pilot in Central Falls, where they’re having rides departing from Central Falls be free during something called geofencing. And I don’t really understand how it works, but I’m wondering if the same could be done with a downtown transit corridor. That way, if the Dorrance Street hub was built, people could travel to Kennedy Plaza for free. I think that people in the transit community feel very strongly about Kennedy Plaza as really being part of their commute. Most riders get off there. I think about 70% of people arriving in Kennedy Plaza depart from there. It’s just become such an important part of how people travel. So I think that no matter what happens with the new hub, we really need to make sure that it doesn’t cost people any money to get to Kennedy Plaza, and that they have very frequent service to do so. But again, I think the issue is very controversial. Our organization, Rhode Island Transit Riders, think that having Kennedy Plaza as a hub makes a lot of sense. It’s right downtown. It’s where people want to go, and we have yet to be convinced that the Dorrance Street Hub is something more than a concept at this point. It’s really just a concept– and we can’t back a concept.

What, do you think, is the best way to attract more people to RIPTA?

That is a great question. I think the best way we can attract more people to RIPTA-and I’m just speaking for myself here, not for my organization, as would generally be the case– but I think we need to make driving less attractive. The reason that people don’t drive in New York is because they don’t have parking spots. We really need to get away from the idea that we need to be providing amenities for cars. We don’t need to be building new parking lots, we don’t need to be building new parking garages. If people want to come into the city, maybe they park in a park and ride and they take the bus into the city. I think the city is really growing, we have a lot of people coming in from other countries and even other states that are moving here. It’s become a really hot area. You can see that with the expansion of the Pawtucket-Central Falls Train Station. More and more people are commuting on that line. I think Providence is a really hot area that’s just going to blow up and I think eventually it’s going to get to a point where it’s not going to be practical to use your car in the city. So that’s what I would like to see happen.