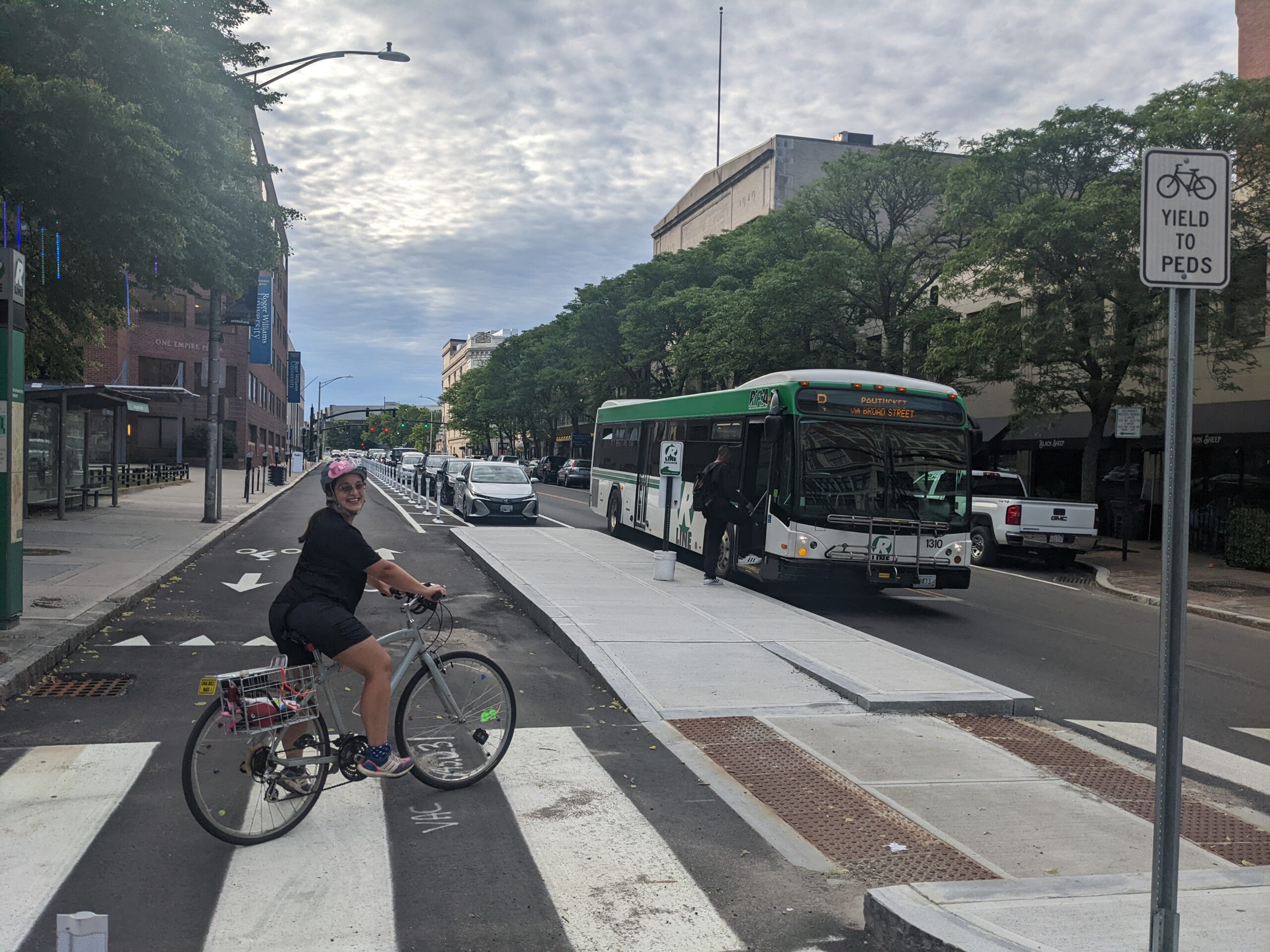 My name is Alana and I am 29 – I grew up in Cranston, and was educated in the Cranston Public School system. Currently, I live in South Providence as a first-time homeowner, and consider myself a “Rhode Island Boomerang” (I left, several times, and to several countries, but keep coming back. Rhode Island is always home). I try to be really engaged in my community, and currently hold volunteer positions with the Fulbright Alumni Association of RI, International House, Food Not Bombs, and a local friends group for a park on my street. I love my neighborhood and my neighbors, and I couldn’t feel more at home.

I take about 30% of my trips on foot, 60% by bike, and 10% by car. I don’t use RIPTA very often, but I’ve been using the R-line more lately now that it’s free. I generally only drive if I’m taking an out-of-state trip, or if I am with a group of friends. Usually I will walk or take the bus for trips if I am not sure there is secure bike parking, or if there is a particularly dangerous part of the route. If I am going somewhere at night, sometimes I feel safer driving, though I feel like driving at night is a lot tougher lately because car headlights are so much brighter than they used to be, especially SUVs and trucks. I started having visual problems this year after suffering several concussions, so driving is already a challenge for me. It’s given me a lot of empathy for people with disabilities that keep them from driving a car – because outside of Providence, Rhode Island really isn’t transit/pedestrian friendly, and it’s hard to go anywhere outside the city without a car. Overall, my lifestyle works really well for me, though I would probably drive more and bike less if I weren’t living so close to downtown Providence.

I’d love to get around Providence 100% by bike! The biggest thing for me would be better connection between the separate bike trails. Getting to the Washington Bike Path is absolutely beyond dangerous – the intersection near the police station is awful, and the traffic on Cranston street is dangerous. I’d also like drivers to be better educated on full lane rights for cyclists. I’m sick of getting honked at, catcalled, and harassed, just because I am riding my bike. If I am riding in the middle of the lane, that’s because I’ve assessed that it’s the safest place to ride. Sometimes riding on the shoulder is dangerous, because cars might not see you. It’s really annoying to have cars pass me dangerously, or, on the flip side, be overly polite and yield to me when they shouldn’t yield. I follow the law carefully but a lot of drivers don’t.

I have told my parents that if I die young, it will be either at the Point Street bridge over 95, or at the intersection of Cranston Street and Garfield Ave in front of the Cranston police headquarters. The Point Street bridge is so poorly designed, there is no crosswalk, and drivers always run the red light at the slip-lane. The Cranston Street intersection is incredibly dangerous and has ZERO pedestrian infrastructure. Also, a lot of the sidewalks in Providence are overgrown and damaged. I play with my neighbor’s kids a lot (all of them younger than 10) and they love to ride their bikes on the sidewalks, but they get nervous riding their bikes over the broken bits of sidewalk. I also wish the city did a better job of enforcing speeding restrictions and red-light runners in the city. People speed on my street a lot and run through stop signs, even when there are children clearly visible playing on the sidewalk or crossing the street. Generally, I feel really safe in protected bike lanes – like the East Bay bike path, or the new South Water Street path. The path there has a great design, because there is a row of parked cars protecting people in the bike lane.

I wish RIPTA had smaller buses (that’s a hard thing to change) with more frequent service. The lack of frequent service makes it really hard to depend on RIPTA, which is why the R line is the only one I really ever depend on. I really enjoy using a combination of RIPTA + bike to get to places that would be inconvenient or expensive to drive + park. It feels great to arrive at the beach on my bike and jump straight into the water, rolling right past the line of cars waiting to pay $30 for weekend beach parking in Middletown.

I used to have a job at Brown University, which doesn’t give employees free parking. Since I lived a little over a mile away from my office and didn’t want to pay $80 a month to park, I started walking, and eventually I bought a bike too. For 6 months, I only used that bike to commute to and from the office – it honestly didn’t occur to me to try doing anything else. I even started taking RIPTA to a few destinations on weekends, since Brown also gives employees free RITPA. When I was laid off in March 2020, I started riding recreationally, since it was a socially-distanced activity. Eventually, I started riding everywhere, and I was only driving a few times a month. My transportation costs went way down, I lost weight, I made new friends on bikes, I loved having more spontaneous interactions with my neighbors and with spaces in Providence, and I just felt that overall my quality of life went up a whole lot.